Instagram has been “downloaded like hotcakes” since it became available in late 2010 (now for both iphone and android interfaces). The perfect mix of a photo sharing app and social network for those visual fanatics. Currently with over 80 million users, it is still showing Facebook (who purchased it earlier this year) that the purchase was worthwhile and fans are not tinkering off anytime soon.
New in Instagram: The photo map which allows users to “opt-in” and then add their photos to the visual mpa where photos are geo-tagged.

However the “instagrams” of the world are popping up all over the place…Now there are new apps which connect to instagram to make filtering more fun, frames for your pictures, ability to combine photos in one one frame, and more. Here are a few of the newbies out there in the mobile space:

Still an iphone solo app – but has the Instagram feel of an old Kodak camera, down to the viewfinder and all. Although it’s not free, it does allow you to upload pictures to instagram and integrates easily. In my opinion it’s fun for the older camera feel even when you’re doing it via iPhone.

Known as the Instagram alternative, is very similar to Instagram in the look, feel, and filter appeal. Also lets you share with friends on Facebook and Twitter instantly. Although it doesn’t appear to have instant shares to Tumblr (as far as I’ve seen and read so far) it does have a web interface which is easy to use for those who like to upload via their computers.

An app which integrates with instagram to help users sort and share photos with ease via album, map, etc. The item that I saw that was intriguing about this one is that you can easily upload to Dropbox for saving. Back that pic up!

Combine your photos from your photo album from your Instagram album or others – combine them fun frames, and then automatically share to your social networks. Including Tumblr (win!) I love how easy it is to use and upload in minutes… 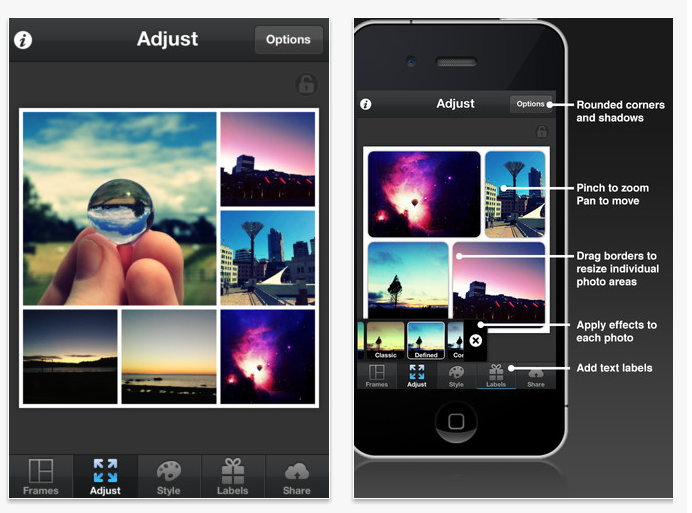 An app that has more camera features to make you feel like you’re using a real camera with a touch exposure and focus. It even includes a stabilizer to steady your iPhone from your shaky hands. Although I still managed to feel inferior because I’m still an amateur photographer – it was fun to play with.

Personally I switch around on my apps and like to play with different ones, but in the end I am more faithful to Instagram. Which Photo app do you use? And why?