Working in digital marketing on a day-to-day basis, it makes me stoked to see when brands and consumers truly connect. When a brand takes a beat and steps back to reflect and understand what their consumers really want. Even cooler, when a brand reinvents part of itself to be with the times. One such brand is Banana Republic. Perhaps I’m biased, because they now sell so many leather oriented clothing, but so what? Here’s what we can learn from BR as of late:

1. They Hired a Kickass Creative Director – one to help reinvent BR and shape it into a new, cooler, fresher brand. Marissa Webb. I salute you. You took BR from being a stuffy, conservative office brand to one that women are excited to wear. The brand now exudes confidence, sex appeal, and best of all, amazing clothes that fit just right.

2. The advertising fits the new brand – The new ads are edgy and they standout. Best part, Marissa herself touts the clothes, makes personal ads through her instagram (without being an ad), and allows people to connect with the brand in a way people never could before. In a way, (sorry Tory), she’s the new Tory Burch. She is a visionary for the brand. Is that a bold statement? Perhaps.

3. They are human – By far my favorite characteristic. The brands replies, comments, and favorites posts by its fans. They thank people for purchasing their clothes. Reward them with fun loyalty gifts. And best of all, are just kind and nice. Not to mention, Marissa herself “favorited” my last tweet about the brand. That is huge in my book!

What brands stand out to you? Which brands make you say – yes, I love this brand?

Note: This post was originally written for Marketing on the Rocks. 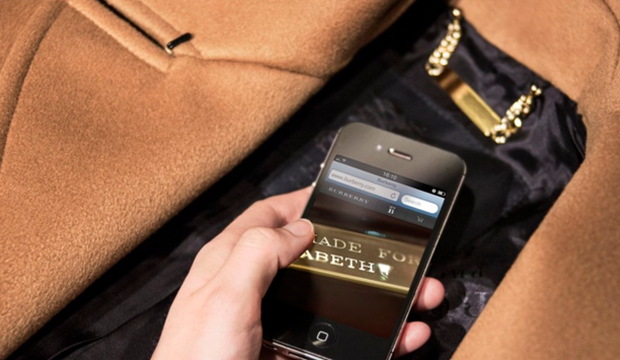 Video content isn’t a new trend, but it’s definitely being adopted more often by brands as the value and engagement has increased with social media and blog content — especially fashion brands, in order to tell their story.

The value of video content is growing exponentially in this visual world of social media and content.

Hot Example: Just look at Burberry and how they utilize YouTube videos and streaming videos throughout their Facebook page. They give their Facebook fans the chance to have insider content on their campaigns and runway shows, as well as be there live and “front row.”

Or if you want to get really tech-sexy: Add video to your in-store experience like Burberry did below. 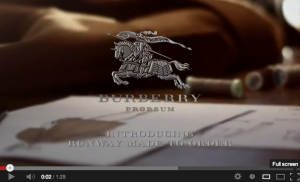 YouTube videos are great for driving action if used properly. If your budget doesn’t allow for youtube annotations (driving to products and services) then embedding video content on social sites or a blog is a great alternative. It’s easier to drive to commerce and doesn’t cost a pretty penny to do so. Note – Videos are great for sharing a sneak peek into a new product line; how a line was made; a runway show; and of course enticing the viewer/customer to “want” – no, “need” your product.

Fans, especially loyal fans of fashion brands, want the inside scoop of the latest and greatest coming down the pike. And when there’s a sale – they want to be the first to know.

Gap on Facebook does a great job of letting friends know when something is new, when there’s a sale coming up, and when there’s an online exclusive.

Read more on how you can engage with video content; and my third tip on how to take advantage of video for your fashion brand on my original full post on Startup Fashion.

Pinterest, a virtual pin board, is no longer just for individuals who pin what they love for potential home decorating, weddings, and recipes…it has become a mecca of fashion, design, consumer engagement, photo sharing, and more with brands and consumers alike. It’s a phenomenal platform for consumer brands to share what they have to offer in visually pleasing ways, as well as demonstrate appreciation for users who already talk about the brand, by re-pinning what those consumers already pinned. Whether it’s showing consumers taking part with the brand, introducing new products, campaigns, themes, or pictures iconic of the brand itself, Pinterest definitely has some legs to stick around when it comes to consumer-brand engagement.

Below are five brands, which have made other lists, and I believe are utilizing Pinterest for the value it can offer and showing their fans and consumers they aren’t just a brand name, but care to be involved with their consumers, offer cool content, and engage more personally…

The Gap on Pinterest has a few different boards including products they make, a focus on denim, but what sparked my interest was the board which was just about repins from other Pinterest users, “popular Gap images on Pinterest.” It’s a great way for the brand to engage with users as well as demonstrate the brand’s appreciation

Whole Foods  takes it to a whole other level when it comes to sharing content via Pinterest. Not only do they talk about holiday preparations for food such as the not too long ago Thanksgiving, Christmas, and New Year, but they also provide other inspirational boards. They aren’t just talking about food they have and offer, but creative spins on food as well as forging there way into adjacent categories which would be of interest to people who care about food, cook often, and put real effort into the preparation that goes into it. Hat tip to Whole Foods for not just talking about their own products.

Nordstrom has gone beyond the regular department store image and demonstrated to consumers they care to offer more than just being a brick and mortar retailer. On their Pinterest page, Nordstrom does categorize products they have now, but they keep it current, looking forward, and fresh. In addition they offer holiday gift ideas and even feature popular brands such as Ugg and Toms, both of which have demonstrated they are not a fleeting trend. However, I do think it would be cool if Nordstrom would take a step further and crowdsource some content for boards such as people wearing Toms or giving holiday gift tips from Nordstrom. Perhaps make it a contest in order to make even more contagious.

The cool thing about the Travel Channel on Pinterst is that avid watchers of the channel will be pumped to see stuff categorized for their interests. Interested in street food or animals from around the world…search no more. Want to get to see a personal side of the channel and its people? Check out some behind the scenes pictures which they bucket away and pin on a board just for those special seekers. The pictures are vivid, personable, and fun. Perhaps another board could be one of people’s travels or food they’ve tried from around the world…engaging a step further with consumer generated content.

The numbers I look at first when I go to a brand page on Pinterst is whether the brand just pins, or do they also “like” and “follow” others on the platform. West Elm has some of the most “likes” I’ve seen among brands. Not only do they show different interior design ideas, but they also have a board for fashion and interior design savvy, Etsy, as well as a board for a personal take – Smile Booth. This board allowed West Elm to show its employees during parties, as well as guests, consumers, and fans of the brand. I always believe in humanizing the brand, and having a board like this one is definitely a good example. 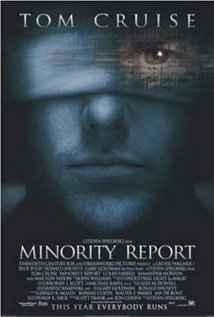 So I stayed in last Friday night and saw that Minority Report was on HBO…thinking “Oh I’ve seen this before, I can keep this on in the background while I catch up on work.” Silly me. I immediately got sucked into the awesomeness that is this movie — having not seen it in years. But it wasn’t just the action and plot that had me watching — it was the marketing within the movie. Great job Spielberg…you caught my “eye”!

In the movie, every time Tom Cruise’s character walks by a digital ad, it is catered directly to him due to recognition through the character’s eyes. It states his name and acknowledges his interest in certain products (previously) and asks questions re: future use. For example, there was a virtual Guiness ad asking about his thirst. Made me thirsty, for sure.

As Tom’s character walked into the Gap to grab some clothing (and at this point he had new eyes – see the movie for explanation) and a voice welcomes “him” and asks about the pair of pants that were purchased last time and if “he’ would like another pair. My question…impressive or intrusive? I was impressed by the marketing used in this movie when it was made in 2002 (obviously it was meant to be far into the future, but still). The geo-location used, was not via mobile but your eyeballs. How crazy is that? I think it’s kind of intrusive at times. For example, if you’re walking into a store and the last item you purchased was a “personal” item – would you want that stated out loud for all to hear in the store as you enter? Would their be restrictions on what is said? Could people opt out? Thoughts to consider as we get deeper into geolocation through mobile…and maybe one day our eyes?! 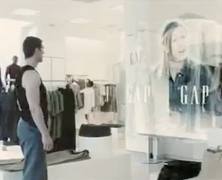